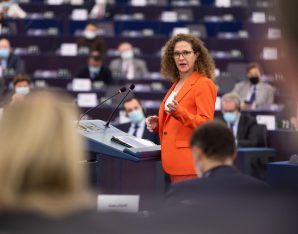 In a series of key note speeches followed by a panel discussion, speakers will consider how Enfranchising EU Citizens and internalising their perspectives and interests can support making national democracies in Europe more international and inclusive.

The speeches are in English and followed by panel discussions moderated by Thomas Peutz, Chair of D66 Delft & D66 International Working Group

The conference is organised by the International Working Group of D66 Delft in association with the D66 Thema Afdeling Europa, ECIT Foundation, Voters Without Borders, and the Friedrich Naumann Foundation for Peace, to address and discuss the plans of D66 to extend full voting rights to EU citizens living in the Netherlands.

The European Union was intended as a political, social and economic integration project. Borders were eliminated to allow free movement of goods, capital, workers and residence. It gave EU Citizens the right to live in different countries, while European political power was enhanced and the financial system strengthened through the monetary union. The Euro crisis and Brexit have however exposed the fragility of the project. Euro scepticism and mistrust among citizens of the member states continues to be nurtured and exploited by populists. There is a sense that European decision-making is taking place far away from home and delegated to a supranational institution run by technocratic officials, no longer perceived to be under the control of nation states, and seemingly threatening democratic self-determination and sovereignty. Democracy in this context is perceived to be under threat as political parties, the legislative branch and people appear to be side-lined in the processes of European decision-making.

Sophie In’t Veld will start from the premise that democracy needs a demos. For many this is the ultimate argument against the European Union as a political entity: such a culturally, historically and linguistically diverse continent cannot possibly be a demos, a European people, with a European public opinion. However, if you look closer, you will see the notion of the European Union built on twenty-seven monolithic nation states is pure fiction. Besides, internal heterogeneity has not prevented states from developing a national identity and a sense of community. In recent years we have also seen the emergence of a cross-border public opinion and a political community. Ironically, anti-European populists are more advanced in creating a values-based European community and a common European profile as a political movement. They defy all the obstacles that pro-European liberals democrats cite, such as linguistic barriers, and via social media their message reaches all corners of the globe. Meanwhile we can see the outlines of a fledgeling European public opinion. Whether about climate change, women’s rights or covid measures: people across Europe are joining forces in cross-border debates and campaigns. The Conference on the Future of Europe may well provide a platform for such pan-European public debate.

Patrick Bijsmans will talk about Euroscepticisim, enfranchisement of EU Citizens and the European Public sphere. Euroscpticism is generally seen as representing a negative, rejectionist position towards the European Union. Nevertheless, some would argue that a more critical engagement with the EU and its policies might actually increase its democratic legitimacy. This partly follows from observations due to the lack of sustained debates on EU affairs with and across borders. Patrick will look at whether the enfranchisement of EU citizens in their country of residence may stimulate such debates. We may assume that these citizens will favour a positive stance towards and active engagement with EU affairs. The debates in the run op tot the aftermath of the 2016 Brexit referendum are a case in point. However, he will argue that this is not sufficient for the development of such debates, as national politicians’ and media’s attention for EU affairs is needed to bring the EU to the fore. From this it follows that the enfranchisement of EU citizens may also have on opposite effect; populist politicians might argue that ‘the elite’ is trying to circumvent ‘ordinary people’ by selling out the nation state.

Tony Venables will explain the work of ECIT in producing a statute on European citizenship which is on the platform for the conference on the future of Europe and is gaining support especially among MEPs who are coming together in a cross-party group. The Statute has three levels of ambition: to bring together what exists to make this transnational citizenship more visible; to fill gaps and support European rights by giving citizens more of a say in European decision-making and better access to justice; to introduce new rights and a more inclusive status. The one measure ECIT believes which could make EU citizenship more real is to extend rights for mobile EU citizens to vote and stand in municipal and European to regional and national elections. Partial political rights can be improved but will remain underused. EU citizenship is not a status of political empowerment as long as its protection and rights to equal treatment depend on the right to vote of others – the national citizens. It is paradoxical that EU citizens can vote for those representing them in the European Parliament but not in the various EU government councils where real power lies. Enfranchising EU citizens where they live as our ECI and D66 propose should be seen as a counterpart to more top-down reforms to make politics more European such as the introduction of transnational lists for elections to the European Parliament.

Read more about the speakers

Due to the current Covid-19 conditions, we organized the congress with a profession livestream set-up. Watch the online conference here.